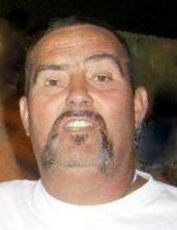 Sadly, Robert passed away on April 25, 2013. . . just 5 months after his story was posted here. He died while waiting for a donor who never came. The world has lost a good man and a friend. Robert's story remains here in his memory.

Robert, age 49, lives in North Carolina and is a husband, father of four, and grandfather of five. A self-employed electrician, he ran the family business all his working years. He was an avid fisherman and loved to travel to spend time with family and friends.

All that changed in 2008 when Robert was diagnosed with multiple myeloma (a rare blood cancer). He spent the next 3 years traveling from his home in North Carolina to Little Rock, Arkansas, for aggressive chemotherapy and two stem-cell transplants. During the course of treatment, Robert had many infections and on several occasions nearly died.

Robert’s cancer is finally in remission. His family is grateful that he is still alive, and they believe God has a plan for him. Unfortunately, though, the cancer treatments caused Robert’s kidneys to fail. He has been on dialysis 3 times weekly since 2008. While the treatments are currently keeping him alive, his doctors say that his only chance at life is a kidney transplant. Robert’s immune system is weak, and his health is declining. He is no longer able to continue the family business or do the things he loves. Without a transplant, he will die.

Robert is on both a national waiting list and a list at the University of Maryland Medical Center. Unfortunately, the average wait for these lists is 5-6 years. He has type O blood, but because UMMC has a paired kidney exchange program, a donor need not have the same blood type.

If you are interested in being tested to see if you are a match for Robert, please contact his UMMC transplant coordinator, Amanda Gormley, at 410-328-4333.