On March 21, 2014, Chad received the Gift of Life from Leslie, a living donor who stepped forward for him. Here is an update we received two months later: "Chad is doing great. He started back to work the past Monday (early June)! He is out of the clinical phase of post-op and sees the doctor in two to three weeks at a regular doctor's appointment. He now will have a blood draw once a week at Reid instead of having to travel all the way to Indianapolis. Leslie says, 'I am feeling great. Just like I did before surgery. I would do it all over again.'" 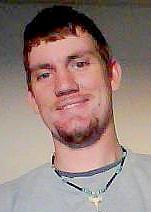 Kidney failure does not discriminate. It doesn’t care if you are black or white, rich or poor, young or old. Actually, let me rephrase that first sentence. Kidney failure doesn’t seem to discriminate with one exception…age. Dialysis units are choke-full of older folks. In fact, it’s uncommon to see a young person in dialysis. I don't know the average age of the people in dialysis in the my center, but my guess would be somewhere way past fifty. That’s what makes it especially sad when someone in their twenties does wind up in this hell. This story is about Chad, a 23-year-old “dialysis brother” of mine.

I first met Chad in 2010 when we were on the late afternoon dialysis shift together. Our chairs were next to each other for a few shifts, so we got the chance to talk over the humming and beeping of the machines. I asked him what happened that caused him to lose kidney functioning. He told me the story of how he was constantly sick in high school and no one suspected his kidneys were failing. It seems odd that a doctor wouldn’t at least consider that but then again, Chad is a strapping young lad. Why would there be anything wrong with him? He told me he missed a lot of school and got way behind. He comes from a farming background, so the “Iowa boy” in me kicked in, and we talked about crops and livestock. It did my soul good to talk about farming with a “farm kid,” because when I was growing up, that’s what about 75% of my friends were.

At that point, I had a catheter in my chest and hadn't yet had the surgery on my arm to create a fistula. But I knew that was coming, and I was dreading it. (A fistula is a surgically created access that joins an artery and vein together to make a blood vessel large enough to withstand the pressure of high blood flow. During dialysis, two large needles are inserted into the fistual—one to draw blood and one to return it.) Chad had a fistula, so I asked him about it, and he told me he had been having trouble with it lately. He told me a story about how they ran a wire up it to clean it out and how painful that was. That did nothing to calm my fears!

“Two good-looking guys like us should be out drinking beer and chasing girls,"  I said, and he cracked a huge smile. I’m not sure if the smile was because the thought of me chasing girls was hysterical or if he really liked the idea of drinking beer. I’m going to assume the latter. That became our little joke. I would repeat that to Chad often as I passed by his chair.

In the spring of 2010, my doctors told me I needed extended dialysis. Treatments made me feel like shit, but they said it would be better for me. Fine. I would do the six-hour treatments. Sleep is for sissies anyway. I decided to try a different time slot, so I left the late afternoon time and started attending the graveyard shift, known as “nocturnal.”  It was quite an adjustment to be in a medical facility from 10 p.m. until 4:30 a.m. three nights a week.

And then there was a bit of a reunion. One night, Chad was in a bed a few spaces down from me...he had started attending nocturnal. I stopped by his chair and said, “Two good looking guys like us …." He just smiled. I asked, “What are you doing here?” He told me he was making the switch so he would have more time to do things during the day. I suspect his family needed his help on the farm. So even though he was sick as a dog, he was helping with farm chores, which I am sure were absolutely exhausting. I was so weak that if I brought in the mail, I had to sit down and rest. Chad was doing man’s work. How the heck he did that I have no idea, but he looked exhausted when I would see him in dialysis.

Then there was a glimmer of hope for Chad. His sister was a match. Hot damn! He might be getting out of there! Every couple of weeks I’d ask, “How are things going?” and he’d explain that she was still going through the testing process. I realize now that there are many medical tests before a potential donor is given the green light. Even so, it seemed like this testing was dragging on for months.

Then one night I asked one of the nurses, “How are things going for Chad?” and her face gave it away. I could tell before she said a word that things were not going well.

“They’ve found a problem with his sister. They think she has the same kidney disease as Chad.”

I felt like someone had punched me in the gut. All this hope that had been building up was snatched away. It just crushed me, which tells you a little bit about the way Chad must have been feeling. The hope for a transplant in the near future was gone, and his sister was now starting this dance with the devil. It made for a very long night in dialysis. Still, Chad was stoic and you never would have known from his demeanor.

Chad has had his ups and downs in dialysis. His fistula seems to continue to be a concern because there are periods of time when the nurses are able to use the needles for dialysis and then times when they use his catheter. Even though those damn needles hurt, you get much better dialysis when using a fistula. I was speaking to Lori, one of our nurses, a while ago and she confirmed that Chad’s fistula had to be “roto-rootered” again and that it was a very delicate process to build it back up.

She then told me she hadn’t had any time off for months and months because she didn’t trust anyone else to put the needles in Chad. So even though she had a new grandbaby in another state, she couldn’t bear to think of someone accidentally screwing up Chad’s fistula again. When she finally felt confident that the fistula was mature enough to leave the needle insertion to another nurse, she was a nervous wreck. She couldn’t help herself. Lori called the dialysis center to check on Chad after she had left extensive notes on precisely how to insert the needles. That's the kind of nurses that watched over us. Dialysis absolutely sucks, but our lovable little family of patients and nurses made it bearable.

But like all of us, they would like nothing more than to stop watching over Chad. He’s 23. He needs to be out doing the kind of stuff 23-year-olds should be doing. Namely, having fun and living his life. But what Chad really needs is a guardian angel. The option of a family member being a donor seems to be out the window. So that’s where you come in, dear reader. For some reason, I was lucky enough to have a brave, kindhearted soul, Becky Melton, help me out. So I am asking each of you to consider being Chad’s guardian angel. And if you are, you can definitely come and drink beer with us. The chasing girls part is optional.

Update: Chad has been on dialysis for 3 years now. He came very close to having a donor, but it was discoverred very late in the testing process that the donor had a medical problem. You can imagine Chad's disappointment, especially since this was the second time his hopes had fallen through. However, if you have type A or O blood, you could be a match! To learn about being the possibility of being tested, please call Indiana University Health at 1-800-382-4602. You can also learn more about Chad and follow his journey by visiting his Facebook page, Find a Kidney for Chad.

Author Jerry Wilde, minutes before his own transplant surgery.

By all outward appearances, Chad--like most people with chronic kidney disease--looks fine. Kidney disease is an invisible illness.

Chad and his sister at the family farm.